E. A. Bowles saw the possibilities of all seasons and winter was not without its interest: “So, if only the owner of a garden will plant enough plants of the most different types and habits  procurable, there ought to be never a day in which he cannot find some pleasure in watching growth or decay, structure of bud, leaf, blossom, fruit or stem, not minute of the daylight hours of the working days in which there is no interesting and health-giving work to be done.” – E. A. Bowles in “My Garden in Autumn and Winter.” 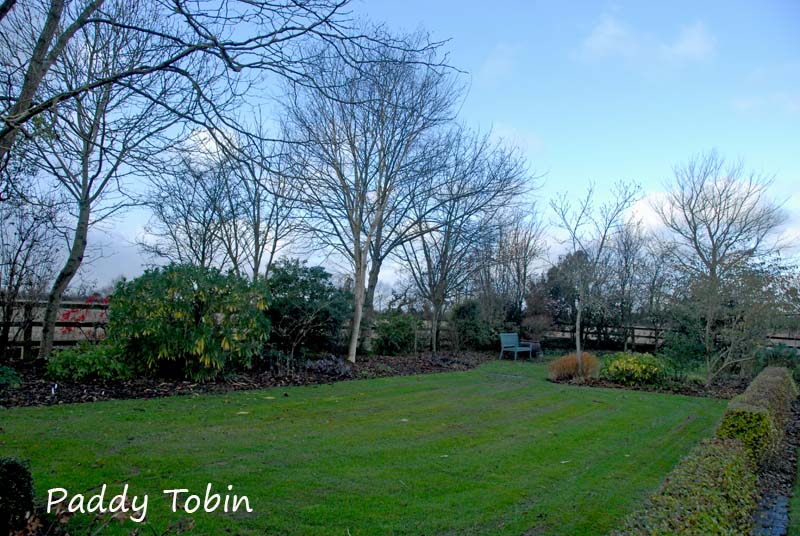 These are the days of the year when one must search for interest in the garden. The days of summer exuberance have long gone; autumn and early winter have been quite miserable and days suitable for gardening are rare rather than commonplace. Despite the bad weather, and taking advantage of any day of even bearable weather, I have managed to complete the normal autumn/winter maintenance. All the usual herbaceous plants have been cut down; those that suited were shredded and all heaped onto the compost bin. The leaves have all but a very few fallen from the trees; in places I have simply raked these onto the flower beds while those on the lawns have been raked up and bagged to rot down to make leaf mould, an invaluable material to add to the soil when lifting and replanting snowdrop.

The autumn has been mild and flower buds have begun to grow on hellebores so I have removed the old foliage to help prevent disease and as it allows one to enjoy the flowers all the better. The last few days have been without rain, and I have taken advantage of what have been unusually dry and pleasant days to cut the grass – though, to be honest, by volume there was more leaves than grass – and trimmed the edges which gives a tidy appearance to the garden, a little like a neat frame setting off a picture.

There are some spots of colour in the garden:

As if to repay my efforts, the main snowdrop season is getting underway. We had an earlier splash of snowdrops, the autumn-flowering cultivars of the Greek species, Galanthus reginae-olgae, which are a treat as they flower so very early but they have never thrived in my garden. They require a very dry and very hot summer dormant period, not always guaranteed in Ireland, and I grow them simply for the curiosity of their early flowering rather than their contribution to the garden.

Peculiarly, there are still some fruits in the garden – those which I don’t wish to use this year and which have been left on the trees or have fallen and have been left.

Feijoa sellowiana (Acca sellowiana) has a very attractive flower earlier in the year and later develops egg-sized fruits. It is an evergreen shrub, native to Brazil, Paraguay, Argentina and Colombia. The fruit has a pleasant flavour, similar to pineapple, but are small and a bit of a fiddle to eat – split and scooped out with a spoon – and we generally don’t bother with them.

The medlar, Mespilus germanica, is a peculiar fruit which needs to be left on the tree – or picked and brought indoors – to ripen, or over-ripen so that the flesh turns a light brown and becomes soft. I have used them in previous years to make a jelly which is quite nice but will never compete with the freshness and flavour of a strawberry or raspberry jam.

The Chinese quince, Chaenomeles cathayensis, produces fruit much larger than the more common Japanese quince but it has never ripened here. Even when left on the branch until it falls and brought indoors in hopes of further ripening in the heat of the house it never approaches being fully ripe. As with the medlars, I have used them to make a jelly – which is pleasant but hardly delicious. They certainly don’t match the delight of baked quince from the true quince tree.