When our children were young we regularly visited the gardens at Ballymaloe Cookery School in Co. Cork. It fitted in with our regular outings to Fota Island and was a pleasant stop on the journey home. We were with the grandchildren in Fota earlier in the week and decided to drop in to Ballymaloe on our way home – a little bit of nostalgia, I suppose, and the desire for a convenient lunch stop. 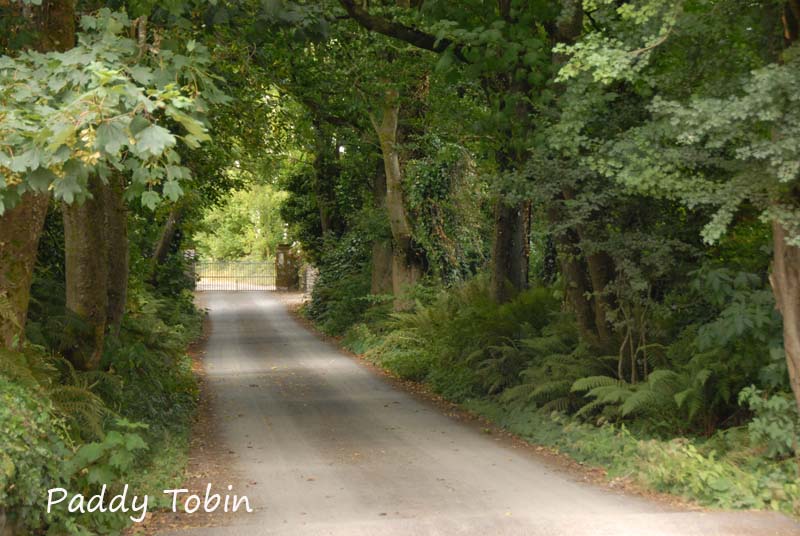 We moved slowly around, linking vistas and corners of the garden with memories from past visits. The apple orchard, designed by Jim Reynolds, has filled out and its geometric lines have become blurred by untidy groundcover planting. The formal vegetable garden, an icon of the gardens at one time, was one of the best examples of a potager in the country. Now, it seemed to be underutilised with beds either empty or filled with green manures; it certainly lacked the tidiness and maintenance that such a formal design requires. 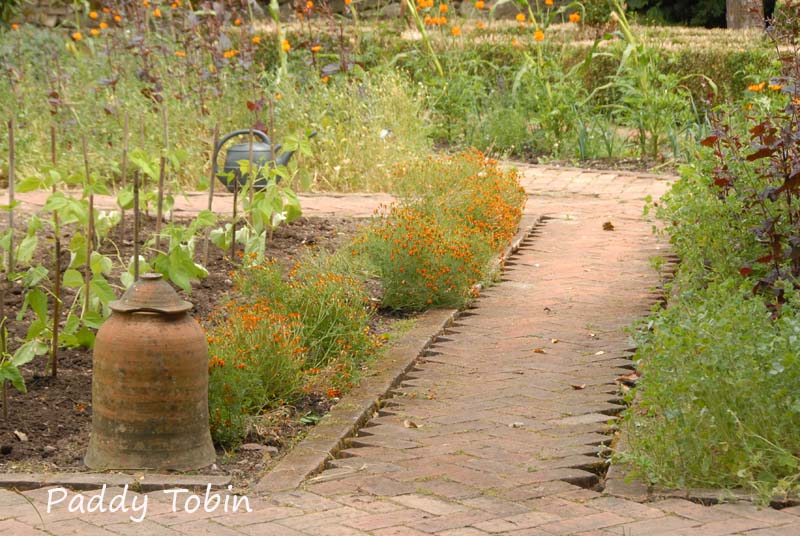 Lydia’s Garden was tired – but one must accept that few gardens have managed to look fresh in this very demanding season when we have had such an extended period of hot and dry weather. The small summer house, over a century old, its floor decorated with broken crockery remains quaint and still a little pleasure to visit.

The viewing platform for the herb garden was once a wooden structure and for the children there was always a sense of adventure in climbing its wobbly steps and standing on the platform which I always told them would collapse if they jumped about. It is now a steel structure, much more safe and essential when used by visitors. The view frames the herb garden perfectly, a geometric layout of herb beds edged with box hedging. Unfortunately, the box seems to have been hit by box blight and has been cut back to allow better air circulation. It is an action many have had to undertake and it leaves the hedges looking very poorly while we wait in hopes of recovery. It seemed to me that the herb beds are used far less nowadays than in previous years as many were quite empty.

The Pond Garden was as I have always recalled it with trees planted in a haphazard informal fashion as specimens on the grass and the pond to the far corner. Although somewhat of a muddle, design-wise, it has a pleasant and gentle atmosphere which I enjoy.

There is a gap in the corner of the Pond Garden and one comes on an ornamental gate, purely ornamental and without function as there is a field entrance immediately beside it. There was a new small demonstration garden, an enclosed space, to illustrate what might be achieved in a small urban garden. The maze has grown well and is now a good place to lose children. I recall the initial plantings of yew had struggled so I was happy to see the plan had eventually succeeded. The area beyond is left to meadow and it appears to me that it simply developed naturally though benign neglect rather than being a sown meadow. There was an occasional flower still in evidence; the grass was drying and becoming golden and it will be shortly be time to make hay.

The meadow ran around the Shell House and the double herbaceous borders and there were two large structures in the meadow: Andy’s Dome was from metal and the Amphitheatre was of wood. Both were fine structures but rather pointlessly positioned, plonked in a field rather than being in any way part of an overall design or layout. The Willow Loch Ness Monster, another feature in the meadow, was wildly overgrown and beyond recognition.

The Shell House is a remarkably beautiful work of art but, understandably so perhaps given its delicate fabric, it was locked so one could only peer through the windows to admire its designs. The double herbaceous borders look to a gate among mature trees at one end and back to the Shell House at the other. The borders were tired and sparsely planted and in great need of rejuvenation though there were some attractive plants which caught the eye.

Our garden walk finished, we headed back to the shop/restaurant area with lunch in mind but a visit to the toilets sent us elsewhere.

7 thoughts on “Times and Gardens Pass!”