A friend living in Normandy posted a set of photographs of old daffodil varieties on Facebook earlier in the week. There were some weird and wonderful names, as suits such “old and curious varieties” as he described them with Narcissus obvallaris ‘Thomas’s Virescent’, Narcissus obvallaris ‘Fat Bud’, Narcissus pseudonarcissus ‘Gerard’s Double’, Narcissus ‘Martin’s Meadow’, Narcissus pseudonarciussus ‘Welsh Conorate’ among others. One he posted which didn’t fit into this “old and curious” category and which I was delighted to see was Narcissus ‘The Old Tipperary’ which was bred and named in 1947 by Dr. Keith Lamb of Clara, Co. Offaly, a greatly respected, admired and loved Irish horticulturalist and gardener. It was one new to me which I must seek out to grow in Keith’s memory – along with his ‘Fairy Gold’.

Peculiarly, these odd varieties have been very popular over the years, even over the centuries. It seems contradictory that gardeners who would normally seek out the more beautiful, the more perfect flowers, have been entranced by these freaks and that they have been grown and treasured for so long. Let me introduce you to just three from my own garden.

Narcissus ‘Van Sion’, also known as ‘Telemonius Plenus’ or ‘Butter and Eggs’ – though it has a long list of other synonyms – was recorded as far back as 1620 grown by a Vincent Sion in London. It is a very variable flower depending on the conditions in which it is grown but if one finds an untidy daffodil in an old garden whose flower has a multi-doubled trumpet, some parts of the tatty flower lighter and others darker, it is very likely to be ‘Van Sion.’ It is a strong-growing daffodil and does very well in grass. It was commonly planted in orchards and is an ideal plant for the presently popular garden meadows – which is where I grow it in my own garden. 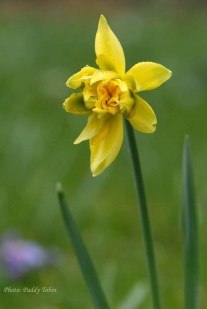 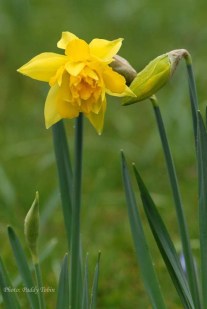 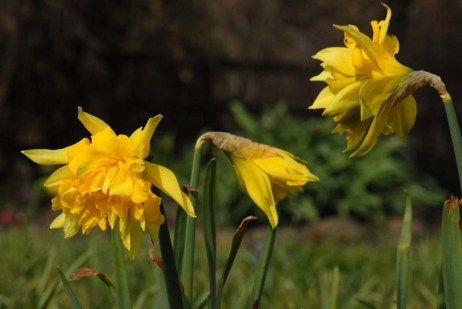 By contrast, Narcissus ‘Eystettensis’ is a model of neatness and tidiness but, though it might seem a sine qua non for a flower to be called a daffodil, it does not have a trumpet but instead a neat arrangement of the six outer segments neatly arranged one layer exactly on top of the previous to give six layers each reducing in size so as to produce a beautiful star-shaped flower. The flowers are a lighter colour than the usual daffodil yellow, more a creamy yellow which is very beautiful. It was grown by the Bishop of Eichstatt in 1611 and his garden “Hortus Eystettensis” is recalled in the name. It is also known as “Queen Anne’s Double Daffodil” (Queen Anne of Austria) and it was suggested by E. A. Bowles that it was a hybrid between ‘Telemonius Plenus’ and Narcissus triandrus. 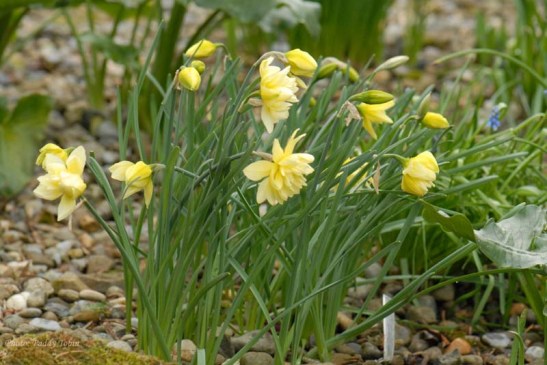 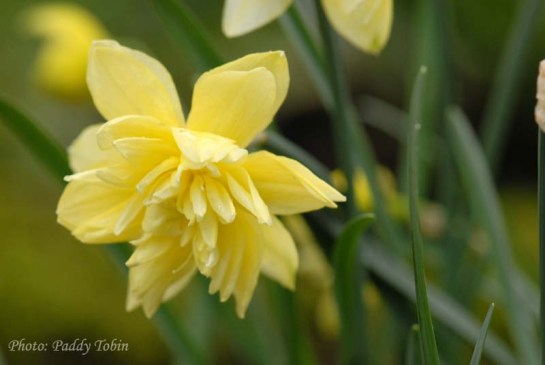 Though the origins of Narcissus ‘Rip van Winkle’ are unknown it will always be associated with William Baylor Hartland, the Cork nurseryman who collected many daffodil varieties from gardens around Ireland in the late 1800s and was mentioned in The Garden magazine in 1884. In colour and arrangements of the segments it is also one of the very different daffodils. It is a greenish yellow, without a trumpet, with the segments symmetrically arranged layer upon layer; those nearer the centre smaller than those to the outside and the edges of all segments curling in towards the central line. It has been suggested it may be a variant of Narcissus pumilus or N. minor. 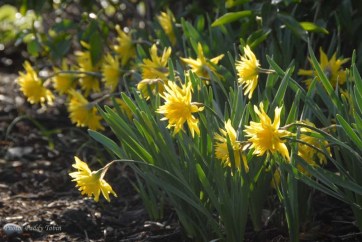