Daffodils are part of the spring garden scene in Ireland to such an extent that we almost consider them native to the country even though they are not. However, we have a climate which perfectly suits the growing of daffodils and we have had many very successful daffodil breeders in Ireland over the years.

As I am from Waterford I will, of course, wish to especially mention Lionel and Helen Richardson who bred, named and introduced several hundred different daffodil cultivars. During his career he had won 62 Gold Medals at Royal Horticultural Shows and his wife, Helen, who worked alongside him and who continued the work after his death won another 20. They lived in Prospect House in Waterford and a city street is named in their memory, “Richardson’s Folly”, though generally referred to simply as “The Folly”.

Of course, we have had many other similarly dedicated and successful daffodil breeders: Brian Duncan, Guy Wilson, Kate Reid, Frank Harrison among others. One whose name might, perhaps, have slipped from memory is William Baylor Hartland (1836 – 1912) but he should be remembered as a pioneer of daffodil breeding in Ireland and also as a saviour of many very old varieties which he collected and later distributed.

His grandfather, Richard Hartland (1745 – 1821) had worked at Kew Botanic Gardens before he came to Ireland and set up his nursery in Mallow, Co. Cork. His three sons, Arthur, Richard and William set up businesses respectively in Turner’s Cross, The Lough and Mallow.

William’s son, William Baylor, followed him into the business and had a nursery at Temple Hill before moving to Ard Cairn, Ballintemple in 1890. He had a bulb farm of approximately 10 acres and sent flowers to various markets, including Covent Garden in London. He also had a retail outlet at 24 Patrick Street in Cork. He was a supplier of flowers to Queen Victoria and was awarded the Silver Banksian Medal by the Royal Horticultural Society in 1903.

He collected bulbs from old Irish gardens and brought and took what were probably self-sown varieties and brought them into wider circulation. Narcissus ‘Rip van Winkle’ is probably the best known of these introductions and is still widely available and widely grown even if it is a peculiar looking thing!

His first catalogue of available daffodils was “A Little Book of Daffodils: Nearly 100 Varieties as offered and collected by W. B. Hartland”. Later catalogues included tulip and apple varieties as well as the wide range that a nursery with the widest and most comprehensive would carry. 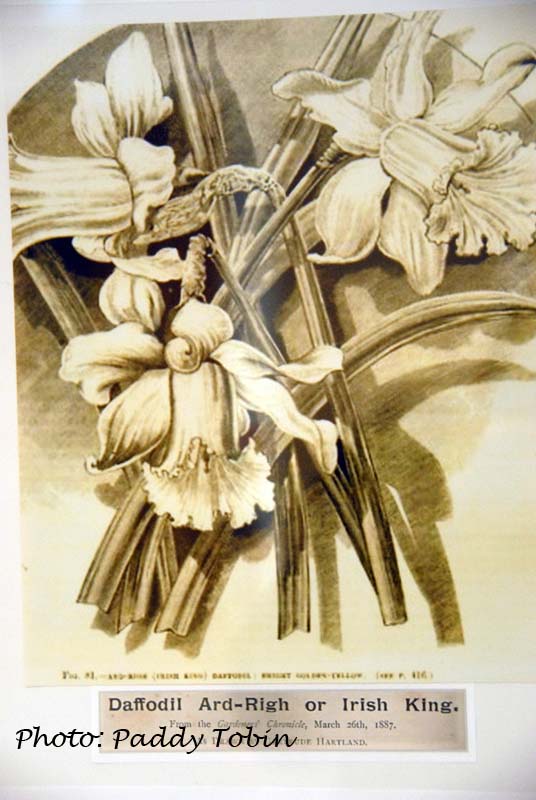 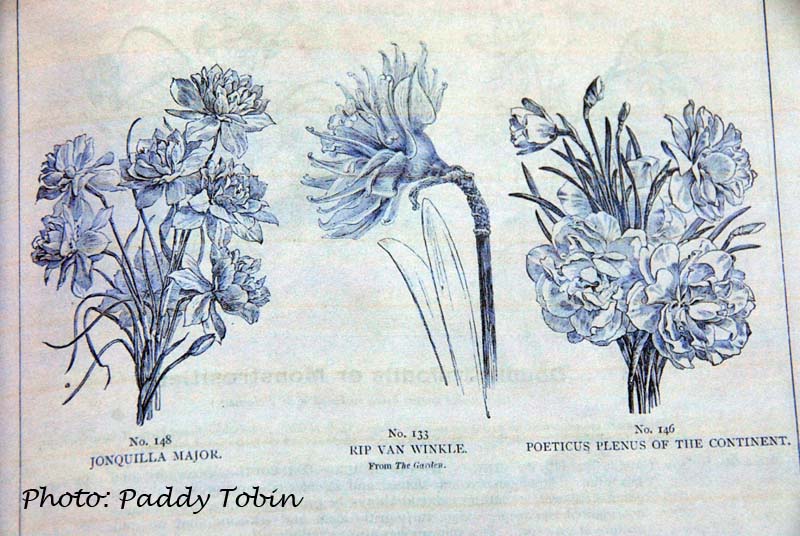 Cork people will know, of course, of Hartland’s Avenue which runs from the Glasheen Road to The Lough, named to commemorate one of Cork’s greatest plantsmen. It is just one interesting snippet about the Hartlands and their connections with Cork.

There is presently an exhibition on William Baylor Hartland in Bishopstown Library, Wilton, at present which would be of interest to gardeners and those with an interest in local history. I visited last week and enjoyed it very much. It was difficult to take photographs of the exhibits as the lights reflected on the glass of the exhibits but I hope I have enough to give you a flavour of what was there.