This is book bursting at the binding with enthusiasm and an almost obsessive love of our native orchids. Leif Bersweden, a precocious botanist who fell in love with native wildflowers as a child, was unsuccessful in his initial application for a place at Oxford University and decided to use his gap year to track down and photograph all the native orchids of Great Britain and Ireland in one year (with one forgivable exception, The Ghost Orchid, as it is so very rare) a feat which had not been completed previously. 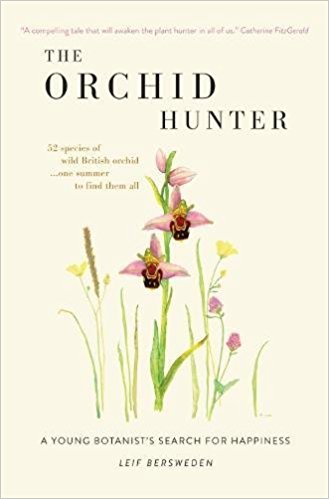 The first ticked off his list was the Early Purple Orchid and his last Autumn Lady’s Tresses which, by coincidence, were my own first and last of this past season though I must confess that I didn’t come across the other fifty in between.  Our native orchids are extraordinarily interesting and it is not uncommon for those who take an interest in them to find they are willing to go to some extremes to view one not found previously. With a group of friends I made several such journeys during this past season and one suggested we ought to dub our group the Fellowship Of Orchid Lovers with the appropriate abbreviation of F.O.O.Ls. Leif Bersweden would have been a very welcome member!

His year was certainly a madcap adventure and how wonderful that we have eighteen year olds who have the interest and enthusiasm to do such things. His travels, in a none too reliable car, ranged from the south of England, to Wales and to the north of Scotland, to the Island of Jersey and to Ireland. He has since completed his degree in botany and, with such enthusiasm, I can only imagine and hope he has every success.

As he works his way though his list of orchids and his accounts of finding them we are treated to general historic notes on each species, when it was first recorded, what previous authors and authorities have said about each, the origins of the name and vernacular names applied along with the excitement of the search and the eventual find. We are treated regularly to idyllic bucolic descriptions of the various locations in which he found himself and these read a little a little sweet at times – “Chaffinches were trilling from the hedges and sheep bleated in the fields down in the valley. A barge chugged silently past on the river below cutting a wide “V” shape into the otherwise glass-like water.”

The subtitle to the book is “A Young Botanist’s Search for Happiness” might first be assumed to refer to the happiness he would achieve in locating all the orchids but there is a regular parallel narrative through the book where the author expresses his thoughts on personal matters. As a child with an interest in wildflowers he felt apart from his peers and, as a teenager, regrets that his hobby is so often one engaged in alone. He wishes for a friend who might share his interest and had the company of a lady for part of his summer pursuit but, as the saying goes, he blew it. Most will choose this book for what it has to say on orchids – I cannot imagine too many are overly concerned about the author’s happiness though, of course, we would wish him well – and this thread in the book is incongruous. There are also some comments on those who helped and advised him which might kindly be described as juvenile humour where the editor’s red pencil might have been justifiably applied.

This book will be of little use to anybody wishing to learn more about our native orchids; it will certainly not become a book of reference but it will be a light read for those already interested. Indeed, I found the many quotations and references to earlier books especially interesting and enjoyable. Though he mentions taking a very large number of photographs in the course of his adventure, very few are used in the book – one for each species recorded and these gathered as one group in the centre of the book. There is a scattering of line drawing through the book, some illustrating orchids and others various views and vignettes mentioned in the text.

The author has since completed his degree in botany and considering orchids as a topic for his PhD. It is heartening to see young people taking up botany and Leif Bersweden, with his enthusiasm and single-mindedness, is likely to make significant contributions to the depths of our knowledge in years to come. I wish him the best.