Over one million people visit Shakespeare’s birthplace in Stratford-on-Avon each year despite the not too often mentioned fact that the house was demolished in the mid-nineteenth century by the then owner as he was tired of the people who called to see it. They continue to come, especially on the 400th anniversary of his death, to visit this hallowed site and to see his garden – which was, until recently, a Victorian garden designed and planted well after Shakespeare had left us and is now being redesigned and replanted in a dramatic style to echo the spirit of the bard. 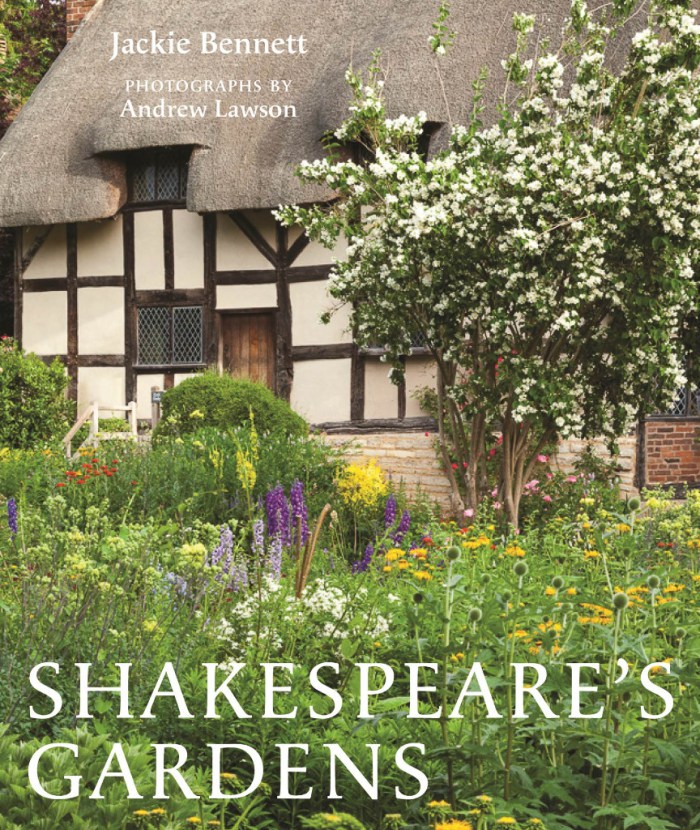 Similarly, visitors likewise flock to home of his wife, Anne Hathaway’s Cottage, the most visited cottage garden in the world, where the gardens date from the 1920s, designed by Ellen Willmott, and so Edwardian in style rather than being original or even true to the original.

I could continue in like vein – it was only at the beginning of this century that it was realised that people visiting Mary Arden’s house – Shakespeare’s mother – were going to the wrong house – but why should we allow facts to spoil a good book! And, contrary to the tone of the above, this is a very good book, a delightful book, informative, well written, beautifully illustrated and a pleasure to read.

We must accept that, even following on Jackie Bennett’s excellent research, a certain amount of conjecture, imagination and supposition must be employed to give us a picture of the gardens associated with William Shakespeare. Absolute historical accuracy is simply impossible. We all know how ephemeral our gardens are and, unless our gardens are of well built hard landscape, it is unlikely they will be recognisable a generation after our deaths. Gardens change continually and rarely persist so we can only look back and inform ourselves as best possible of what went before.

An introductory chapter sets the scene in a very informative manner with a description of gardening in Tudor times opening our eyes to Shakespeare’s World and giving us the background to the garden descriptions which follow. Five gardens are described: Shakespeare’s birthplace; that of his mother-in-law, Mary Arden, which he had visited as a youth; Anne Hathaway’s Cottage; some contemporaneous London gardens which he might have visited; Hall’s Croft, the home of his doctor son-in-law and his final home, New Place.

Throughout there are constant quotations from Shakespeare’s works which compliment the text perfectly, adding a layer of richness to the accounts of the gardens and illustrate that Shakespeare certainly knew his plants and that he most certainly would have enjoyed the gardens which have been constructed in his memory.

Reading this book is quite like visiting the gardens as they are nowadays, I suppose. We must realise that perfect accuracy is impossible and, accepting that, we find that we can still enjoy the experience very much. Jackie Bennett’s work is always most enjoyable – her “The Writer’s Garden” was outstanding – and when it is illustrated with the photographs of Andrew Lawson the reader is sure to be delighted.

2 thoughts on “What does one say, Mr. Shakespeare?”